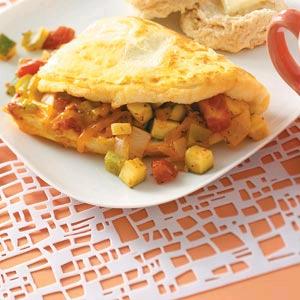 In a small bowl, beat the 4 egg whites, water and cream of tartar until stiff peaks form. In a large bowl, beat 2 eggs and salt until thick (about 5 minutes). Fold in the whites.

In a large oven-proof skillet coated with cooking spray, melt butter. Pour egg mixture into skillet. Cook for 5 minutes over medium heat or until puffed and lightly browned on the bottom. Bake, uncovered, at 350° for 10-12 minutes or until a knife inserted 2 in. from edge comes out clean.

Meanwhile, in a large skillet, saute the broccoli, zucchini, onion, green pepper and Italian seasoning until tender. Carefully run a knife around edge of oven-proof skillet to loosen omelet. Place vegetables on one side and sprinkle with cheese; fold other side over filling. Serves 2.

When President Obama announced a new program during the recent G8 summit to help bolster food and agriculture in developing nations through corporate “pledges,” I was most struck by his choice of partners in the effort. A Reuters report on the announcement read:

The initiative includes a new partnership with agribusiness giants such as DuPont, Monsanto and Cargill, along with smaller companies, including almost 20 from Africa, which will commit some $3 billion for projects to help farmers in the developing world build local markets and improve productivity.

Those three companies are the good food movement’s equivalent of the law firm Dewey, Cheatem & Howe — not the folks it wants to see put in charge of anything, much less “feeding the world.” These companies believe that exporting western-style industrial agriculture to the developing world (Africa in particular) is key to ensuring enough food for a growing population. And they maintain this position despite the growing evidence that industrial agriculture can’t solve the problem.

As a recent report in the journal Nature on the best way forward for agriculture explained, current models suggest that industrial ag just won’t cut it:

Unfortunately, this “unbridled use of irrigation and fertilizers” is the form of agriculture that Monsanto, DuPont, and Cargill know best.

So I was concerned when I ran across this new study, which found that to date, human-caused groundwater depletion is a greater contributor to sea-level rise than climate change. The U.K. Guardianexplains:

Trillions of tonnes of water have been pumped up from deep underground reservoirs in every part of the world and then channeled into fields and pipes to keep communities fed and watered. The water then flows into the oceans, but far more quickly than the ancient aquifers are replenished by rains. The global tide would be rising even more quickly but for the fact that man-made reservoirs have, until now, held back the flow by storing huge amounts of water on land.

“The water being taken from deep wells is geologically old – there is no replenishment and so it is a one-way transfer into the ocean,” said sea level expert professor Robert Nicholls, at the University of Southampton. “In the long run, I would still be more concerned about the impact of climate change, but this work shows that even if we stabilize the climate, we might still get sea level rise due to how we use water.”

Chalk this up alongside dead zones, superweeds, superbugs, antibiotic resistance, and nitrogen pollution as yet another unintended consequence of industrial agriculture.

How does this water study relate to the G8 agriculture initiative? Well, drilling into deep and ancient aquifers using techniques borrowed from oil production is currently a favored technique for improving agricultural productivity in the developing world. And the new G8 program appears designed to do much more of it.

As the Institute for Agriculture and Trade Policy noted in a post on its blog, these “tube wells” have already been said to cause “an environmental disaster” in Asia. An Agence France-Presse report from several years back noted that:

In the case of India, smallholder farmers have driven 21 million tube wells into their fields and the number is increasing by a million wells per year.

“Nobody knows where the tube wells are or who owns them. There is no way anyone can control what happens to them,” Tushaar Shah, head of the International Water Management Institute’s groundwater station, based in Gujarat, said.

“When the balloon bursts, untold anarchy will be the lot of rural India.”

Half of the country’s traditional hand-dug wells have already run dry, as have millions of shallower tube wells, causing some despairing farmers to commit suicide, he said.

In China’s north plain, that country’s breadbasket, 30 cubic kilometers (1.059 trillion cubic feet) more water are being extracted each year by farmers than are being replaced by the rain, New Scientist said.

Groundwater is used to produce 40 percent of the country’s grain.

In June, the state paper China Daily admitted that the nation “may be plunged into a water crisis” by 2030 when its population is scheduled to peak at 1.6 billion.

It just seems that regardless of the evidence that practices like these cause destruction, the U.S. insists on continuing a form of ecological arbitrage which offers short-term gains in productivity that won’t be paid for until long after those who’ve enjoyed them are gone.

Ironically, one of the main motivations behind the G8 plan is that we, the richest nations in the history of the planet, are feeling — as the Reuters report declared in its headline — “cash-strapped” at the moment.

As I see it, the best way to feed billions of people is not through more industrial agriculture, but rather through the expanded application ofagroecological techniques — meaning working with the land, rather than against it. If a crop requires drilling into ancient aquifers for irrigation, it’s probably not a crop that’s suited for the region in question. And of course, agroecology also calls for minimal inputs of fertilizer and pesticides and no GMOs. I’m not the only one who believes this; the U.N.’s “Save and grow” program for developing world farmers is itself based on agroecology.

At just 39 calories each, red yellow peaches are an excellent source of the antioxidant vitamin C. Vitamin-C is required for connective tissue synthesis in the body. A diet rich in vitamin C provides resistance against infectious agents and help scavenge harmful free radicals.

Fresh peaches also provide a moderate source of vitamin A and beta-carotene which converts into vitamin A in the body. Vitamin A is essential for good vision. It is also required for maintaining healthy mucus membranes and skin. Consumption of natural fruits rich in vitamin A is known to offer protection from lung and oral cavity cancers.

Peaches offer vital minerals such as potassium, fluoride and iron. Iron is required for red blood cell formation. Fluoride is a component of bones and teeth and is important for prevention of dental caries. Potassium is an important component of cell and body fluids that help regulate heart rate and blood pressure.